Story of ad gefrin, a royal complex in northumberland valley discovered in 1950s, to be told at new attraction.

"Just here would have been the great hall", says chris ferguson to a guardian reporter and a dozen indifferent sheep chewing grass in a stunning northumberland valley.

Over there would have been the royal residence and behind that, a grandstand. We are on top of one of the most important sites of anglo-saxon history anywhere in this country.

Ferguson is standing in a field telling the story of one of the last centurys most remarkable archaeological finds. It is here, and in the nearby market town of wooler, that he and his family are spearheading the development of a 10.4m tourist attraction, one that aims to be the sutton hoo of the north.

Ad gefrin near the hill of goats was discovered in the 1950s by a team led by archaeologist brian hope-taylor. It is a site that includes a complex of timber halls, including the vast great hall and a unique wooden grandstand which formed the royal summer palace of seventh-century northumbrian kings and queens. 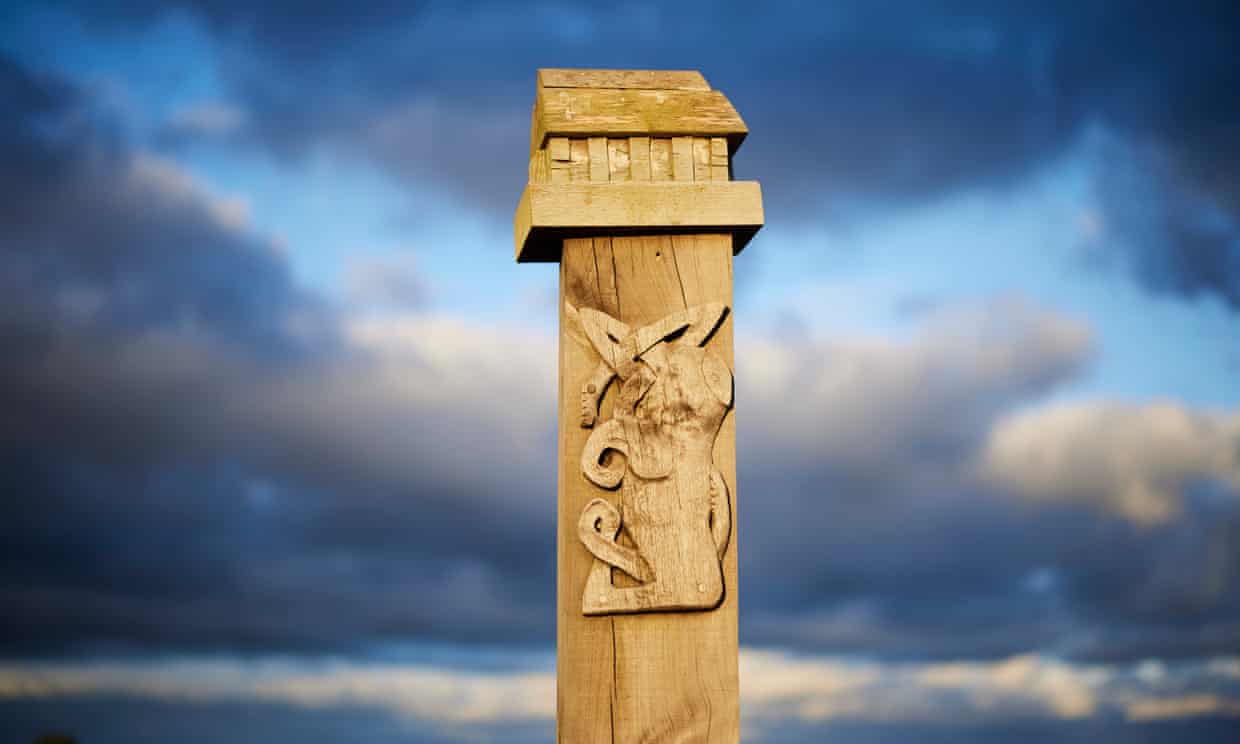 Ad gefrin includes a complex of timber halls, including the vast great hall and a unique wooden grandstand. Photograph: christopher thomond/the guardian
while arguably as important as the sutton hoo finds of the 1930s, it did not have the glamour. There was no buried ship or fabulous helmet, so it has not resonated in the public consciousness in the same way, says ferguson.

But it should. Now it feels like a very idyllic rural backwater, but in the seventh century it was one of the most important sites in britain.

Ad gefrin was the summer home of the kings thelfrith and edwin and his queen consort, thelburga, as well as the saintly oswald. It was a stage for some of the most momentous events in early northern english history, including the first conversions to christianity.

Bede, writing in his ecclesiastical history of the english people in ad731, tells how the italian missionary paulinus, sent by pope gregory i, spent 36 days, morning to night, baptising people in the river glen.

It was a place of hospitality, feasting and cultural exchange and would have had visitors from all the other anglo-saxon kingdoms as well as rome and ireland. It was also a place of battles and feuding, burned down twice by penda of mercia and cadwallon, king of the britons.

The plan is to open a visitor centre and museum in wooler that tells the vivid story of ad gefrin and northumbrias anglo-saxon golden age. It will include an imagined recreation of the great hall with thrones and weapons and objects, showing that the so-called dark ages were far from gloomy. They were the most blingy people you could possibly imagine, says ferguson. So this place will look really blingy, with bright, vibrant colours and gold.

If game of thrones-type anglo-saxon histories bore you, then ad gefrin is also creating northumberlands first legal single malt whisky distillery offering tours and tasting. The hope is that profits from the distillery will underwrite the more perilous cultural side of the operation. You dont have to do both, but great if you do, says ferguson.

After wooler, ferguson hopes people will travel to yeavering, about four miles away, the picturesque location of the ad gefrin archaeological site. Some may even climb yeavering bell and discover the iron age hill fort, the largest in northern england.

Ferguson, head of operations and lead curator on the project, said the plan was to open in autumn 2022. Does he see it as a sutton hoo of the north? Effectively, yes. If you want to learn about the early medieval period in the north, i want this to be the place you would naturally come. Northumbrias golden age is not a period which has had the same attention as sutton hoo, and it deserves to.

Ferguson believes anglo-saxon history generally does not always get the attention it deserves. This period just gets missed in general education. People might get taught at school the romans and the tudors and then the victorians. You quite often get asked, so when are the anglo-saxons? Which ones do they come between?

This project is about people and excitement and bringing history to life.

Article written by The Guardian - https://www.theguardian.com/science/2021/nov/07/sutton-hoo-of-the-north-104m-visitor-centre-to-celebrate-anglo-saxon-site

Join us on our journey

Become one of our Corenkyn as we launch our founding membership.

By subscribing, you give permission to Ad Gefrin to contact you.

To find out more about Northumberland’s newest and most exciting visitor destination and whisky distillery, please use the button below to contact us now.